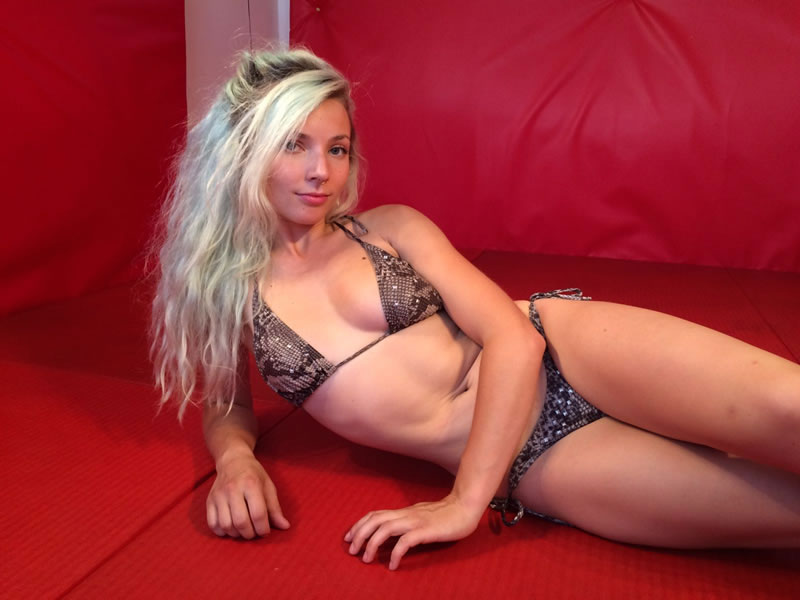 Let me start of by saying that the ”wrestling scene” is virtually non-existent in my home country. Therefore, even though I had watched some videos about wrestling, I had myself never experienced a wrestling session before. When personal business in London came along, I finally had the chance to try it out once and a quick google search led me to the submission room. After going through the roster, my eye fell on Nixie as my first opponent ever due to her incredible looks and a couple of e-mails later and everything was set.

To be completely honest, I fully expected to have to hold back a little because Nixie seemed to be a recent addition to the roster and she was quite a bit smaller than I am. Those observations even made me doubt my choice for a moment, since I wanted a competitive match. Even though I knew about myself that I was a bit out of shape I figured a young man like myself would most likely stand a good chance and perhaps even have to pace himself a little to keep it competitive. I really could not have been more wrong.

I am not going to describe every fall in this review since the score ended with 19-2 to Nixie. This is with me trying my sincere best to win. It wasn’t so much that she was stronger than I am, since I usually managed to win the initial push, but in whatever happened afterwards, she outsmarted me almost every single time. Nixie seemed to know exactly what she was doing in defence, especially with her legs, and more often than not turned the tables on me before I realised what happened. Most of the 19 submissions she got out of me were through headscissors, while the other one’s where through tiring me out and smothering me into submission with her belly, breasts and even once through sitting on my neck sideways.

As soon as Nixie’s legs were around me neck it was only a matter of time before I submitted to her. I never once escaped one of her front headscissors even though several desperate looking attempts were made. She didn’t always start squeezing with her full strength immediately, sometimes waiting for a bit watching me struggle with a little smile on her face as if to say ”you’re not going anywhere”. As soon as she did start squeezing it was a matter of seconds before I had to tap or even submit verbally if she happened to be holding my arms underneath her back in the hold. I doubt I ever lasted longer than about 5 seconds once she actually started squeezing

At the start of the match the rounds lasted a lot longer while my poor shape and constant submitting made it more and more difficult for me towards the end. In one of the last rounds she managed to get me onto my back and sit on my neck comfortably with her hands in her side, looking down onto me with that same smile I spoke of before. Being completely exhausted by this point my attempts to unseat her were completely futile as she sat there looking rather amused at my attempts. At some point I verbally told her ”I submit”, but since my ears where blocked by her thighs, I am not sure it was loud enough for her to hear it. Regardless, she did not move and instead sat ther looking quite amused. After she felt it had been enough, she pulled my head up and rolled onto her back again for the front headscissor, with predictable results.

All in all, it was an incredibly fun session with an incredibly beautiful girl. I can very much imagine Nixie turning into a fan favorite. Her signature front headscissor is nearly inescapable. My neck still hurted two days after the session resulting in me having to tell the people I was visiting London with that I must have slept in an awkward position. Nixie, I don’t know if you will ever read this, but I had a lot of fun and I hope you did too. if I ever visit London again I will be sure to get a rematch to see if I can figure out the secret behind escaping those scissors!

I had a free morning and was interested in trying something different, so I arranged a wrestling session with Nixie, via Pippa. I had never done anything like this before, and came across the website largely by chance, but I thought it would be a healthy and educational shock to the system. And as it turned out it was!!! Pippa was very efficient in responding to my initial emails, and we were able to arrange a session with Nixie within a day of first contact.

Before the session I was a little nervous as I did not quite know what to expect, but Nixie turned out to be very personable and put me at ease quite quickly. She was very clear about what a wrestling match would entail and what was to be expected. I chose her specifically, because she appeared to be one of the newer/younger wrestlers and thus less likely to break my neck! (not that she would do such a thing).

Nixie turned out to be technically very gifted, and very tactically astute. I was able to hold her off for a while, as I was a bit stronger, but only a short while as she turned out to be relentlessly determined. Wrestling Nixie, was a bit like trying to climb a tree with moving branches, that can drag you to the ground at any given moment (and keep you their). She never seemed flustered, and was effortlessly composed even when I felt I had overpowered her.

She also had a fantastic knowledge of different techniques, holds, and strategies. The session was as much an education as it was a match. She took some time to show me different things, let me try out different scenarios, and discuss possible counters. Moreover, she had a lot of interesting stories about her experience in the sport. She was extremely eloquent and passionate about what she did, and that made the discussions really engaging.

This session was perfect for me as a beginner, and Nixie was extremely accommodating. But I also suspect that she had a few more gears in her, and could compete just as well with more experienced competitors. Overall, I cannot recommend her any more highly for someone looking for a challenging but fruitful wrestling session.

The organisation on Pippa’s end was also very good. I am very interested in trying it again sometime, and am seriously considering doing a few lessons to learn more about what Nixie showed me.