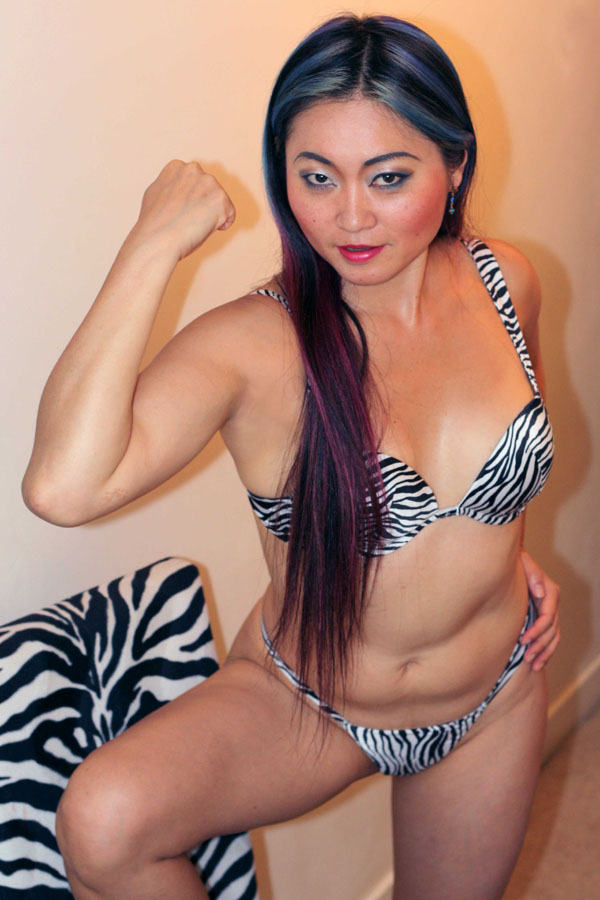 I had seen many videos of Amrita on various web-sights over the years so I was very pleased to see her on the submission room wrestlers list, so I took the opportunity to book her for a session.
I was definitely not disappointed, at the start of the session she confirmed what holds I was in to, after explaining to her I quickly found myself in her headlock soon to be pinned on the mats. From there on I was completely helpless.

You could tell from the start Amrita has a lot of experience with wrestling, her holds were perfect she could make you submit whenever she wanted with her strong powerful thighs and creative wrestling holds. She took great pleasure in my crys of pain as I was trapped in her holds, here I am today still suffering the aches from her beating the day before. It truly was a treat to wrestle someone of Amrita’s class.

Had the pleasure of a session with Amrita recently. I’d seen her in action a few times and loved her style of wrestling. Didn’t think I’d ever get the opportunity to meet up with her for a session in London though.

I was waiting outside when she arrived and I have to admit I was quite nervous and a bit in awe of her really, but excited for what was to come.

I’d asked for a bit of one sided boxing to start the session – it would be my first experience of it. So once I’d chosen her attire, we began and she gave me a couple of minutes of light to medium punches. I wished afterwards that I’d have asked for more but it was a good introduction to the “pleasures” of one sided boxing and I would be keen to try it again in future sessions.

Then we got down to the wrestling which is what I really came for. Before the session Amrita asked me if I wanted her to say much during the session as she doesn’t normally like to say a lot. I said it was fine by me if she didn’t say much – I sometimes prefer it that way actually.

Anyway, she started me off with a headlock/arm bar combo, then for over an hour proceeded to go through her extensive repertoire of holds which she’s renowned for. I got all the holds I was hoping for including a few I’d never experienced before. I really love the way she performs these sessions. As I said, she doesn’t say too much, apart from occasionally saying that you can try and escape then telling you that you can’t! But she’ll make little noises to accentuate the effect of domination and also when she’s increasing the pressure of a hold.

Also, sometimes when she has you in a hold – head scissors for example, you tap out then instead of letting you go completely, she just applies the pressure again until you find yourself tapping again. Plus she moves you around in hold as well. In the head scissors I was being rolled from side to side and she lifted her bottom off the floor to increase the pressure until I tapped – brilliant stuff!!

One of my favourite holds from her was the boston crab. She doesn’t just go for a quick submission. She moved me around, bobbed up and down a couple of times, increasing and decreasing the pressure on my back until again I had to tap out. She just plays with you really.

My favourite hold however was the Fig 4 leg lock which I got on 3 separate occasions. She locked me in then the “fun” begins. She has an ability to move her body, only slightly, which made me be flung helplessly from side to side. And then she kept lifting her bottom high off the floor to increase the pressure on my legs, prolonging the hold, laughing at my helpless predicament until with one final increase of pressure I finally had to tap out.

Towards the end of the session I suggested that she could go a little bit harder on me. Which was a big mistake! I was soon in a crushing head scissors  – her iron hard legs making me tap instantly.

All in all this was fantastic domination wrestling and has to be experienced. I hope to see Amrita again and be put through the “ringer” once more and next time include a longer and more intense spell of one sided boxing as she’s really good at that too!