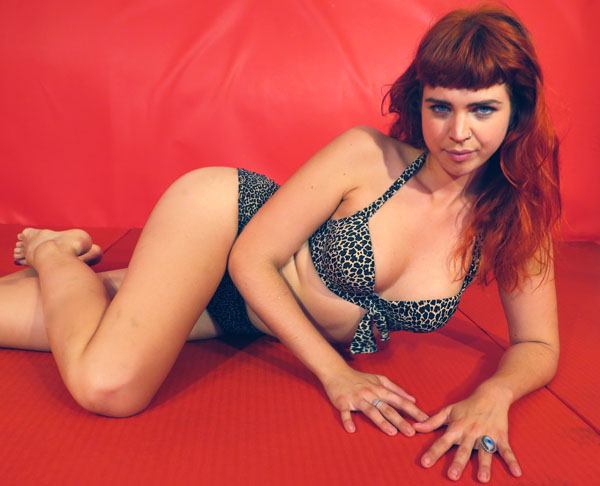 I recently (Sept ’16) had the pleasure of meeting Venus. I think I can sum up the enjoyable session she concocted for me with two familiar adages: “Looks can be deceiving” and “Be careful what you wish for”. The former relates to Venus’s statuesque form and feminine appearance which belie her considerable brute strength and ferocity on the wrestling mats and the latter refers to how she skillfully pushed me beyond my comfort zone into total submission, but more on that later.

Before we began, she asked me about what type of session I wanted and listened intently, as I described my preference for one sided domination fantasy style wrestling. I also mentioned that I especially liked scissor holds, facesitting pins and smothering. Venus did not disappoint and delivered on all these fronts and more.

She looked stunning in the black one piece I requested she wear for our session. I would describe her physique as toned and lithe rather than overtly muscular which is certainly my preference. We were still chatting as we circled each other on our knees at the start of the match. Then it all happened very fast…while I was in mid-sentence she pounced on me with the speed of lynx and I found myself caught in a cripplingly tight headlock and forced down to the mats. I remember being quite surprised by her sheer strength. Looks can be deceiving indeed! She followed up the headlock by jumping up onto my chest and applying a schoolgirl pin, my head held firmly between her thighs and upper arms pinned down by her knees. I have had sessions with in the past with other ladies where I have been able to twist or bridge out of this predicament, but not with Venus. I was absolutely trapped and helpless. Just to put things in perspective, Venus and I are of similar height and weight and I am in reasonable shape with above average upper body strength so I should have had a fighting chance.

There is no need to go into great detail about the rest of session, it’s suffice to say I was totally defeated by Venus. Her assaults were ceaseless and unyielding and actually seemed to gain momentum as my resistance became weaker over the hour. Time after time I found myself pinned on my back staring up at he bright, intelligent eyes or clamped between her legs while she forced me to confirm my submission and her dominance with a wicked smile. Holding me fast with her long legs she would taunt me by punctuating her words with brief squeezes of her leg muscles. She mercilessly smothered me with facesitting, mocking my futile struggles as she counted how many seconds I could go without air, sometimes adding a long a pause before the last number to make me struggle even more. Towards the end of the session, I managed to gasp that I felt genuinely overpowered, i.e. I was not role playing a submissive male. Venus’s response was succinct: “This pleases me”.

Despite this being out first session, she had a keen sense of what my limits were and knew how to push them just a little bit further. In this way, and through creativity, she made the experience much more interesting and darkly exciting. It’s also important to mention her playful sense of humour. Although being completely worked over, my time with Venus never felt oppressive or too serious as we exchanged good-natured banter throughout the session.

In summary I would highly recommend Venus. She is a strong, attractive, articulate young lady with a real dominant streak, just be careful what you wish for, she may oblige more than you expected 😉

Recently I had the pleasure of having a one hour semi-competitive session with Venus. It was an exhausting, competitive and extremely enjoyable session at the Submission Rooms venue. I was welcomed by Venus wearing a black one piece and fishnets as discussed, and was immediately put at ease by her calm, friendly manner. She has a stunning body and a beautiful face, and at six feet tall is physically imposing with a stare that will melt you and turn you to stone all in one go.

We began by discussing the session, we started by showing each other some holds. I soon had her locked in a tight Boston Crab, which was when I became aware of her amazing flexibility. Convinced she was about to tap I asked her the question, only for her to calmly reply ‘I do lots of yoga’. We followed by semi comp wrestling, as soon as we started, like the flick of a switch she became uber competitive.  After 15 minutes I was exhausted and on the wrong end of a 9-3 score line.

We finished with a beatdown, and I enjoy the fact that Venus clearly took pleasure out of all the scissors and smothers, making me submit again and again. The intensity of the session was always broken up by interesting conversation about her and the industry. This was welcome as I was spent, and needed to catch my breath. I would highly recommend a session with Venus Vendetta, the looks and legs of a Goddess with a devilish side waiting to leap out at you.

I had the lovely pleasure in meeting Venus Vendetta. The first thing you noticed is her tremendous height. In bare feet, she stands at 6ft tall. The next thing you notice is her beautiful face. What a great smile and wonderful eyes framed by gorgeous flaming locks of hair. She is also very warm and friendly. Venus is one very strong and powerful woman who knows how to wrestle. She looked absolutely stunning in a leopard print bikini top and a black thong.

The first thing we did in the session was height comparison and with Venus standing at 6ft tall, she easily towered over my little 5ft 5 inch body. She was nearly head height above me, and with the tops of my hips only coming to about the bottom of Venus bum.

After the height comparison, she started off the session by putting her entire weight onto my face. Her amazing ass covered my mouth and nose and it wasn’t too long before I started to tap out as I was finding it hard to breathe. After sitting on my face for around 5 minutes, she snatched me up into one of the tightest bodyscissors I’ve ever felt.

The first time I felt Venus thighs was in a bodyscissors in which I was quickly tapping out too. I literally felt my ribs were going to be crushed and I was gasping for air. She said “Ooh that was quick”. Then she smiled and said “This is going to be fun”, I knew I was in trouble. I’ve been scissored by a few tall girls over the years, but not very many have been as tall as Venus. I was completely taken by surprise by how much leverage and power her endlessly long legs could generate.

It is certainly the most brutal body scissors. I have ever endured and I’ve had a lots of session with different women.

Venus’s legs are endlessly long and there is absolutely no escape from this reach when she gets you in a scissor hold. Once she pulls you in and locks you up, it’s all over.

My session with Venus was one of the best sessions that I have ever experienced and I can’t wait to schedule another session with her. I very much highly recommended her

Not surprisingly power and aggression – not love – were literally the overwhelming elements in the intensely enjoyable session I recently had with Venus, the tall, slender, long legged wrestling goddess synonymous with the immortal Roman deity of love.

Venus’ smiling and very friendly demeanour belied her strength and determination to ensure that she came out firmly and again literally on top in our one hour encounter which fairly whizzed past. Whilst we seemed fairly evenly matched in height and weight , her superior wrestling technique meant that for most of the time, I remained well pinned beneath and by her repertoire of pins, holds and headlocks as well as being assailed by her taunting banter throughout. My own undoubted heroic and strenuous attempts to wriggle free or take a degree of control ultimately proved not just futile but also exhausting. I had sessioned with Venus a few times before and each time she has presented an increasingly sterner challenge. My well-being was not helped on this occasion by her admission at the end of the session that she hadn’t trained for a while recently and was still working her way up to her usual fitness and strength levels. I made a mental note to book another session with Venus her before she gets even stronger and to think long and hard before that about how best to counter and escape her sinuous clutches the next time round.

I would absolutely recommend Venus for anyone looking for a fun and energetic semi-competitive session.

My session today with Venus nearly didn’t happen, but I am so happy it did because I have never been so thoroughly dominated in a wrestling session. It started with a simple headlock, a simple headlock from some one who I first thought did not look strong enough to give me too much trouble.

I have never been putty in someone’s hands, but Venus squeezed, pinned and smothered me into submission, literally into submission. I was made to say what she wanted and behave how she wanted despite my best efforts to escape or resist her. Tapping, begging and whimpering whilst laying on my back became my only forms of defence. And I was only too happy to let Venus push my boundaries and leave me feeling completely helpless. It was an incredible experience with a beautiful and skillful lady that I can’t wait to repeat.

I had a great session with Venus (March 16, 2018). She is strong, dominant and powerful, yet easy to talk to and a good listener. I am a foot fetish guy, and she found great ways to dominate me with her long legs and beautiful feet! The session itself turned out to be more of a fantasy/domination session than a competitive wrestling match. Like I said, Venus was so easy to communicate so the session unfolded precisely how I imagined it to be and the some!

All in all I am really glad I met this gem and I had a lovely time! Thank you Venus!