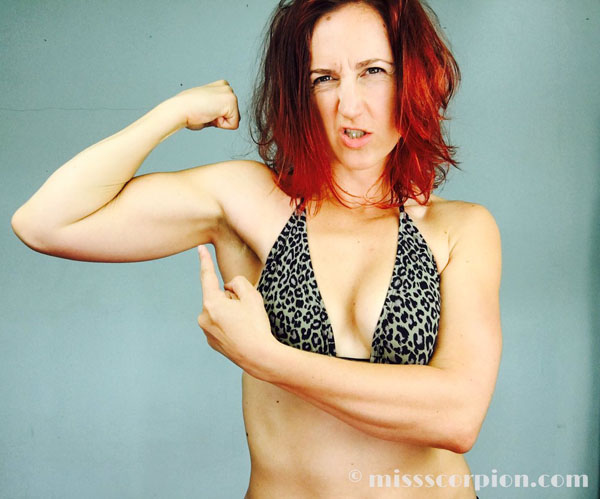 Scorpion is a blast.  The photos of her legs don’t give you an idea of the strength, and her BJJ training is evident in the skill and accuracy of her moves. She does an amazing job of combining fantasy wrestling (scissors, smothers) with true BJJ submission fighting. I knew for the first bit of the session, she was ‘going easy’ on me, and as we got to know each others’ capabilities, I encouraged her to play a little harder.  OMG – she was unreal. I was tapping like crazy without any ability to stop the onslaught of this amazing fighter.  She had a dizzying array of outfits and looks simply stunning in either a catsuit (her favorite) or a latex bikini (my favorite). She is really professional about arranging the session. In a word – amazing.

“Scorpion is a nice person and she has the sense of humour. She has an athletic body, strong arms and strong legs. She has a very good technique and she knows many holds. In 3 days, we did 3 competitive sessions and every session was different. Her favourite hold is rear naked choke (RNC) with body triangle. We made a bet (30€) about my ability to escape this hold; what a mistake! She squeezed hard, I could not breathe, I has had to tap immediately and I lost 30€. She has a very good resistance: one time, I succeeded in keeping her neck in my arms and I squeezed. With her iron neck, she didn’t tap, pushed my head with her hand, very skilfully escaped, came on my back and…RNC! Another time, she put me to the mat on my back, came on the top, captured my head in her legs, turned on her side and won the point with a perfect triangle choke. She knows many other holds; for example, she tried an armbar; I interlocked my fingers to resist but she pushed my left arm with her strong leg and extended my other arm easily. She is very quick and I could never  imagine her next attack.She has not her eye on the clock but,when the bell rang, I was so bruised with my neck and my arms so painful and I was happy to take a good rest. I like very competitive sessions; I think I have found the must with Scorpion.”

After viewing a lot of videos online, where I thought that the guys “simulated” the pain I decided to have my first session last May with Scorpion. I contacted her online and she responded very quickly. She was very kind and professional, after a call and a few email the “rendez-vous” was taken. We both agreed on pantyhose for this session, when I first saw her I immediately noticed that she looks sexier and stronger than on the pictures. She totally demolished me during this first session, I was very surprised by her strength and control. She made me tap a lot of times with a lot of different grappling. She is a great wrestler, she can hold you tight without much efforts

A few months later, we agreed to meet again in Paris. We agreed for a semi comp (as I have no wrestling experience) and I asked her to keep her position when I tap and to not release me immediately. I also asked for more headscissors this time, she agreed and I wasn’t disappointed

I told her that this time I would be ready, that the effect of surprise was gone and this time won’t be as easy this time for her to make me tap. She warned me that she got stronger since last time…
I should have thrust her; she demolished me even more than last time. I couldn’t believe it but she got much more stronger in a few months. She also incredibly fast and also a great wrestler. She is totally in control and when she holds a squeeze you cannot escape and have to beg for her to let you go. The first reverse headscissor was insane, all her squeezes and her body scissors sucked of all my energies. In the end it was even hard for me to talk.

However Scorpion is a great person in life, very kind and funny, when she gets on the mat you will have a terrible time she will show no mercy and it will be for you to ask for it.

Being more a sub than a wrestler, I went to see Scorpion with a bit of apprehension. I was not sure we would succeed in combining her interests (wrestling and martial arts) with mine (domination/submission games). Moreover, it was my first time with a pro and I was afraid not to be physically fit enough. The session we had was amazing and better than what I could expect. Scorpion is a real beauty and a lovely person. She takes great care of her clients and it is obvious that she enjoys wrestling and sessioning. She was dressed in her lycra outfit (I could die for it!) and she could combine physical force with submission and punishment. If there were a subscription to sessions with Scorpion, I’d be the first one to book!

Had a rough sweaty and extremely fun session with the lovely scorpion, this time wearing BJJ gis. Over the course of an hour, she slowly methodically used her BJJ knowledge to sweep pin and submit me several times, using my own gi to wrap me up into a helpless package and applying many technical choke holds and arm locks. Any brief offence I could mount and any positional dominance I managed to secure was quickly reversed, and I spent most of the hour pinned beneath her trying to avoid her choke hold and arm lock setups. Would highly recommend this type of session for anyone interested in facing a tough skilled opponent who takes delight in smashing her victims 🙂