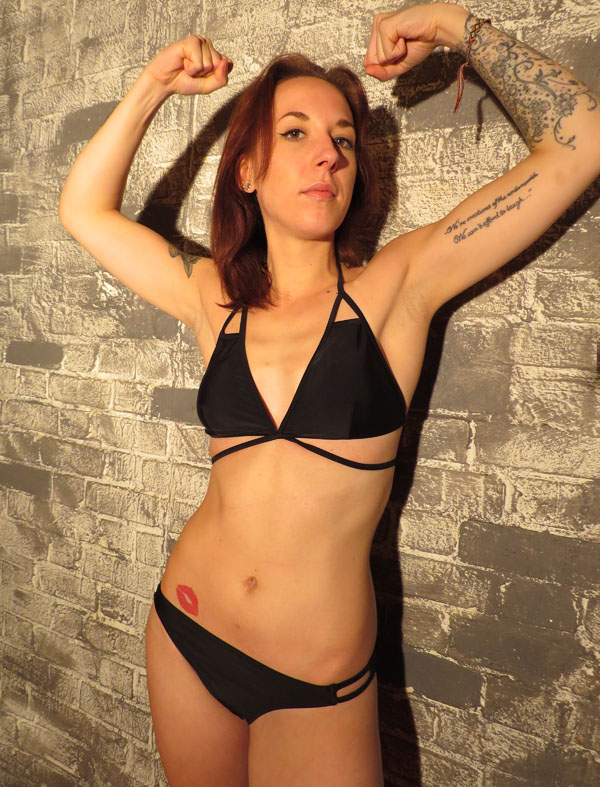 Her name’s Cobra. I scheduled a semi-competitive session with her, requesting lots of scissors, schoolgirl pins, and grapevines, the last of which is her favorite hold.

I say semi-competitive because that’s the type of session I requested. The name though implies at least some kind of competition where here there was only a one-sided massacre with me being submitted again and again by her long strong legs.

She’s fairly new on the scene; I believe she said she’d been doing it for 7 months when we wrestled. However it was more than enough to overwhelm me, who has no wrestling or martial arts experience but did have a forty pound weight advantage. It didn’t do me any good.

She’s tall (5’ 10”) and her long legs seemed to come out of nowhere and lock me up in inescapable holds. I got trapped in lots of body scissors, head scissors, schoolgirl pins, and grapevines plus a few armbars too. Any counter-moves I made just seemed to make my predicament worse. I asked her, rather than concentrate on squeezing out a quick submission, to keep me trapped in holds for a while. She delivered perfectly. So many times I was immobilized in a hold until she decided she was tired of that one, upped the pressure, and…tap. One time she got me in a body scissor and told me “I’m going to be keep you here a while.” Wow.

She delighted in locking me and keeping me trapped. We both had a great time. The only downside is that it had to end. But anyone interested in having a tall, beautiful, playful woman take them down and squeeze them into submission over and over should book a session with Cobra.

Had a amazing time in the Submission Room with two amazing, completely stunning lady’s Cobra and Blaze and their pictures really don’t show just how beautiful they are.

I went for a competitive match two on one as I am not a small bloke and have been told I am quite good and did win my last one on one so I thought it would be a good challenge and God was I right got there. Cobra let me in I had asked if she could be in her new bikini which she was and she looked amazing great body and legs and very pretty little feet which I was soon to get an hour of close up on Blaze arrived a little later in her high thigh suit and we all headed in to the room.

The girls get on really well and really do make you feel relaxed and at ease well until the match starts and then it was time for them to use me as there play toy I lost count of how many times they made me tap but they are both amazing wrestlers and have unbelievable strong legs and very flexible I nearly got one tap on blaze but cobra broke my hold with not much effort but was an amazing time the girls spend there time making me tap and laughing it was well worth it we all had a great time and will be looking forward to seeing them again soon book them as a pair or individual I can bet you anything you will definitely not regret it.

I cannot recommend Cobra enough. She is beautiful, such a lovely person to talk to and she made me feel really at ease throughout the whole session. She also happens to be an awesome wrestler! She is powerful, quick and her scissors holds are incredibly strong. The session that I had with her really re-ignited my love of wrestling, and if you’re looking for someone who is bags of fun and who genuinely loves what she does, look no further than Cobra.

Being my first ever session, i was a little nervous. However, i needn’t have been, as was greeted by the warm/friendly Cobra, who immediately put me at ease. Facilities are really good, plenty of space and nice matted area. Cobra thoroughly kicked my behind, and although i did get one submission out of her, I’m sure this was out of kindness. Despite her been incredibly nice, she had the most incredibly strong legs which she used to great effect, and done with a sadistic kindness!

Thoroughly enjoyed myself, and wouldn’t hesitate to recommend her and will be back to see her in no time!